5 Reasons why a business should be on social media 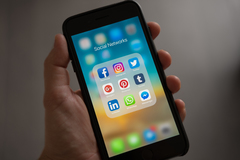 In a highly competitive market such as the one in which most companies are today, it is understandable that each marketing investment has to be carefully evaluated and defined in order to reach the target market in the most efficient way. For this reason, many companies may hesitate to invest resources to obtain an adequate and strong presence in social networks, losing thus a great opportunity because of apathy, ignorance or underestimation.

Social networks are a current phenomenon; but in no way short-lived, which have been growing year by year and are now a fundamental part of billions of people around the world. Just to talk some numbers (May, 2017), Facebook alone has almost 2 billion active accounts globally and; in the United States alone, 70 million users are active on Twitter at least once a month. These are surprising numbers, which grow day after day and demonstrate the great relevance that social networks have in a large number of potential customers. Any company that wants to maintain and increase its market share must have a wide and strong presence in social networks, mainly because:

In order to get the most out of these benefits, leading companies in Digital Marketing; as we are at +58 Digital Communications, offer an effective and comprehensive Media Management Service. An investment focused on achieving and maintaining a correct image and exposure management is without a doubt a profitable investment. Do not miss the opportunity to get better returns for your company using social media!